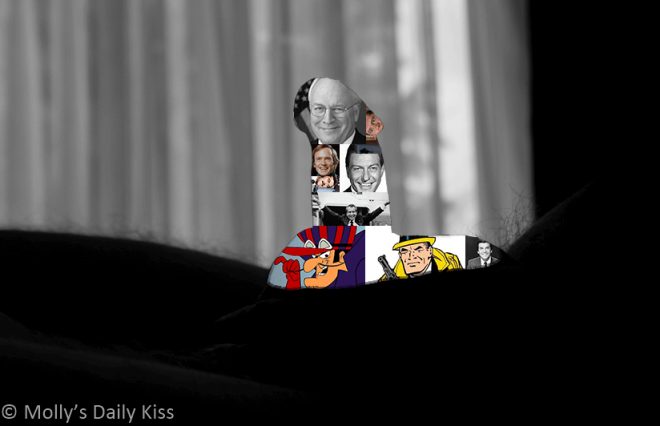 If I did the silly Facebook thing that would be my status for my penis. It’s complicated.

I love my dick, it has brought me decades of pleasure and hopefully a bit a pleasure to a few of my partners. That being said, I don’t show it to the world. Molly can attest to that. As many of you know we met online and communicated by messaging back and forth for months with mostly just our words. Molly did eventually send me some pictures and I appreciated them. I did send pictures as well, but none of them were of my cock, even after she asked for a picture I was reluctant to do so.

Now this wasn’t because I have some sort of mutant appendage. It was because it is just a part of me. A small part of the bigger picture, not how I introduce myself. No “Hi my name is Michael and I have a penis, LOOK, isn’t it amazing?” Every guy has a penis, some big, some small, some curved, some circumcised and some not. Imagine if we treated any other part of our body the same way? “Hi, here is my big toe, isn’t it wonderful? I bet you want me now?” Of course we wouldn’t, but some people seem to think that it is the most important thing about them, that they are defined by what they have, or do not have between their legs. I prefer to show you the rest of me, and then when you can’t stand the anticipation any longer release Bob Jr.

While you can see my cock on Molly’s blog I don’t think of those as cockshots so much as a glimpse of our life and relationship. There is one picture that exists on the web that I do think of as a cockshot (a cockselfie if you will) but I am not going to tell you where that is.

I was raised in a time and manner that taught me the rules of what being a man meant. You were courteous and polite, well spoken and clean. You held a door for a woman, offered your coat if she seemed cold, stepped in if someone was harassing her and never said anything hurtful and never ever hit a woman. You know the gentleman thing.

When dealing men the rules were slightly different but still extremely codified, you deferred to your elders, you looked a man in the eye when you shook his hand, and your word was unbreakable.

Now the 60’s and 70’s were a fairly turbulent time in so many ways and many adults were not ready for the changes in sexual and social mores and really not ready when my peers and I  started attending anti war marches and ERA rallies. Things for men started to become more difficult. The rules of engagement started to change, the things you were supposed to do were now the things that were exactly wrong, it got a little more complicated.

None of this was bad, it just meant it wasn’t quite so simple and this was all long before we even dreamed of the internet, and that really kicked things into high gear. The rise of the web was also a time when people saw each naked in person less and less, and the internet became the substitute, except now you could choose (if you were very patient) what you saw. Since porn always leaps headlong into technology mostly what we saw was carefully selected bodies, the ideal (well someones ideal) of women, and men. I think  it is often overlooked what effect that might have on men and the way they view their own bodies and most certainly the rise of the penis as what mattered most about being a man took firm hold then.

So men thought that it was ok to lead with their dick.

So to those men who send unsolicited cockshots… just don’t. If a woman wants to see it she will ask… really, I promise and if you keep sending them you will be mocked and reported. Just grow up.

To the women that get these cockshots, I am sorry, there is no good reason why you should have to tolerate this. You should be angry, outraged and offended and you should take whatever action you feel necessary to feel safe. But if you have it in you, could you please not mock?  These men just haven’t been getting the right message, that doesn’t excuse their behavior but sadly mocking only drives them to the imbeciles ( so called Mens Rights Activists) who yearn for a time that never was. And that isn’t good for anyone. I know they deserve to be mocked, but it doesn’t help the world to be the place it should be for you… and men.

P.S. The image for this post was made for #dickfest2016 where cockshots were solicited, go and have a look. Please do NOT vote for my cock… that would just be ri-dick-ulous

P.P.S. There will be a post on size (you have been warned)