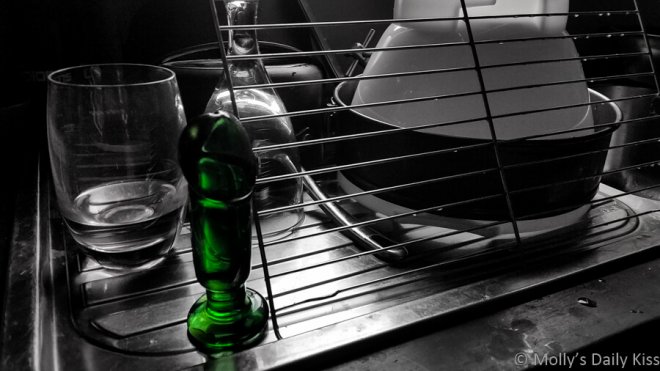 No, neither Molly or I are coming out of the closet as gay.

I am boringly and stunningly heterosexual, and Molly says she is heteroflexible.

Do you separate your non-kinky aspects of your life? Do you even have to at this point? If you say no, I will be completely jealous.

I know we have freedoms that other don’t. We work from home so have no workplace issues (In fact at most workplaces we might both be called to visit HR for sexual harassment of one another). We talk openly and honestly about sex and relationships to Molly’s kids and while I don’t flog her while they are around she will earn an affectionate swat on the bottom from time to time. We keep adult books on the bookshelf and lube bottles can be found scattered around the house and when asked we talk openly about what those thing are for and change what we tell them as  they become old enough to know more about them. Hiding things only makes them forbidden and forbidden things more attractive. Her parents know, but it doesn’t some up in dinner conversation. My parents are both gone and my kids know but again it doesn’t come up in our weekly phone calls. So yeah, a visit to our house and you might see a sex toy on our draining board.

To be honest most of our nearby neighbors are quite a bit older than we are and while we know them enough to ask them to feed our cats we don’t really hang out with them (although we did discover some other kinky people who live down the street from us at our munch). I know that because of our public presence some of them know about our lifestyle but it really hasn’t come up, I am sure we are gossiped about but it hasn’t really had an impact. Molly attends a local camera club and often submits nudes for competitions and since that is also a mostly male and older crowd there has been some rather juvenile comments and bad behavior and Molly has had to make some complaints, but at the same time she is starting to see some of the bolder photographers starting to explore the idea of nudes in their work. So I am going to count that as movement in a positive direction. Some of the brighter members of the club have managed to work out Molly’s websites (man people can be stupid) and feedback so far has been positive.

In our circle of friends and the wider world

We run our local munch in a pub near the train station (for easy non-driver access) and they know exactly what the munch is (they tell other patrons we are a photography group) and are thrilled that we bring around 50 people on the last Wednesday of the month to support their business. As a result most of our friendship group is packed with people of all ages, sizes, colors, and kinks and while we do have friends that don’t identify as kinky I can’t think of anyone we know that well that doesn’t know about us.

Now of course Molly runs a rather popular assortment of websites and we have been on Channel4 for their FSoG documentary and been in several magazine as well as attending the recent porn protest in London and speaking at Eroticon in Bristol (you really should attend if you can) so being in the closest is something we made a conscious decision to give up quite a few years ago. I have to say that it is pretty damn wonderful to have been able to do that and I know that many of our friends (both in person and online) would like to be able to do the same, but the world being what it is… they just can’t.

Our goal has always been to maybe try and change the world just a little bit. To show the mainstream that being kinky is nothing to fear, so that someday it won’t matter at all if you are kinky because in the end we are all just people trying to lead good lives.

2 thoughts on “Out of the Closet”