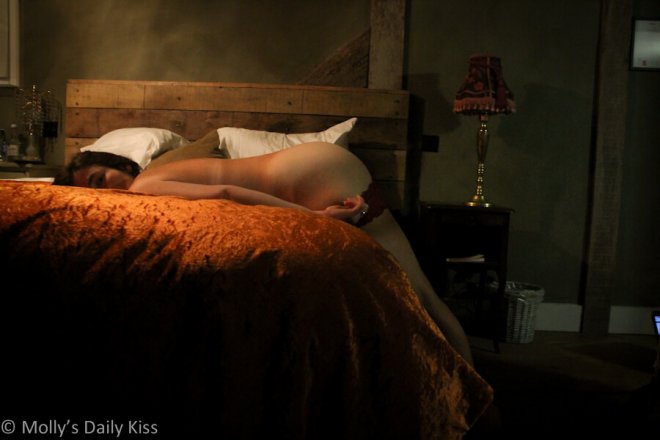 There is a tradition is the US, known as Birthday Spankings, . It is rather old fashioned but since I have been called to the light of kink I have decided that this old tradition needs to be revived for the modern times, and of course because I am me I had to go and see what other Spanking Rituals there might be. My good friend Wikipedia came to my rescue.

There are some rituals or traditions which involve spanking. For example, on the first day of the lunar Chinese new year holidays, a week-long ‘Spring Festival’, the most important festival for Chinese people all over the world, thousands of Chinese visit the Taoist Dong Lung Gong temple in Tungkang to go through the century-old ritual to get rid of bad luck, men by receiving spankings and women by being whipped, with the number of strokes to be administered (always lightly) by the temple staff being decided in either case by the god Wang Ye and by burning incense and tossing two pieces of wood, after which all go home happily, believing their luck will improve.

On Easter Monday, there is a Slavic tradition of hitting girls and young ladies with woven willow switches (Czech: pomlázka; Slovak: korbáč) and dousing them with water.

In Slovenia, there is a jocular tradition that anyone who succeeds in climbing to the top of Mount Triglav receives a spanking or birching.

According to Ovid’s Fasti (ii.305), during the ancient Roman festival of the Lupercalia naked men ran through the streets of the city, carrying straps with which they swatted the outstretched palms of the hands of women lining the racecourse who wished to become pregnant.

In North America, there is a tradition of “birthday spankings” where the birthday girl or boy receives the same number of hits as her/his age (plus “one to grow on”) during the birthday party. Birthday spankings are administered over the clothes and usually by close friends or family members, and are generally playful swats not meant to cause real pain.

I think this means that I have enough legitimate scholarly background to bring Birthday Spankings into the new millennium and export it from the US to the UK (To be fair the UK already has a long and storied spanking history) so I think that someone might be getting a special spanking next week. I am not sure she will think that is a present for her so much as a present for me but it is a gift for somebody.

@FocusedFilthy It is brilliant. Well done you. And I wasn't sure about the iris part, how much was the original image and how much was editing. Either way it is an amazing picture