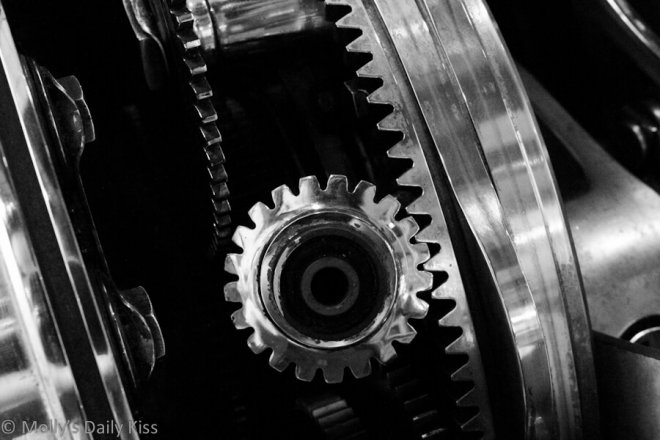 The Watchmaker was busy at his bench when he heard the chimes of the evening hour they rang louder than the sound of the waterwheel turning at the side of his establishment. Glancing up he noticed that the lamplighters were out as the dusk pooled and gathered outside his shop. He stood up from his work and smoothed his leather apron as he lit his own lamps and locked the front door. His dinner was a simple filling pie and a slice of bread and a glass of wine. He prepared a second plate of food and a cup of water.

Pulling aside the rug on the floor, he uncovered the trap door and carefully climbed down bringing the food and water with him. As he made his way through the cellar toward his second and much grander work area he lit the candles and lanterns along his path to his grand design.

He had labored many years working on his machine, using all his skill as a craftsman. Making all the cogs and gears himself, the platform and pulleys, levers and belts, all driven by the waterwheel and all for a singular purpose.

He set the food on a table by the platform and paused a moment to take in the fullness of his labors, the way it shines and glitters in the candle light. He is anxious to see it in motion, to see his machine realize his grand vision.

Moving to the head of the platform he looked at the young lady secured firmly in place.

“I shall remove the gag, screaming will not serve you except to weaken your body, and I think you will want all of your strength for what is to come.”

As he removed the gag from her mouth she whimpered and began to plead.

“I am afraid that won’t do at all, for I have built this device and invested a great deal of time and effort and I shall see it tested.”

With that he positioned the final piece of the apparatus between her spread legs. A well oiled brass rod that slid into place just inside the lips of her cunt. She squealed at the touch of the cold , slick metal. Once all was ready he sat at his desk, took out his notebook and inkwell. After a few minutes of scratching at the paper her looked up at the girl, strapped into this vast and complicated engine and said.

Pulling a level next to his desk a low rumble, felt more than heard shook the room as the device came to life, the belt from the waterwheel started to turn gears, move belts, spin cogs like some warped and twisted clockwork coming to life. Even the poor girl attached to this infernal contraption was mesmerized by the light catching on all of these intricately moving parts, until she felt it. Felt the metal nestled inside her start to move, ever so slowly. At first she wasn’t sure it was moving at all, but as the moments passed she became sure as the stiff rod forced its way a millimeter at a time deeper inside her.

“I have started you off on the slowest setting. As time passes the speed and depth of each thrust will increase until you orgasm. Then I will reset and the cycle will start over again.” He paused with his pen at the ready “Please tell me how this feels for you as you approach orgasm, and be as open and precise as you can be. This is after all, for science”

“Interesting” the Watchmaker said as he looked at his watch and noted the time in his notebook.

7 thoughts on “A Clockwork Orgasm”