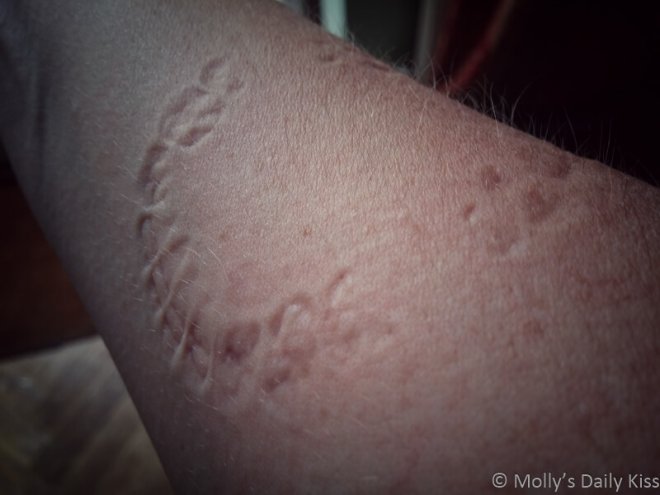 Molly was editing pictures today for an upcoming Photo Club competition and she was asking about what song she might use to go with a picture she has used on Sinful Sunday for which I had suggested the title. She’s Like a Rainbow. Now since the challenge for the competition was to use a song title that described the picture and I thought that was a perfect match. She on the other hand asked what song that was supposed to be which led me to ask.

“Are you even British?”

She thrust her arm in front of my face and said.

So I did. I mean really what did she think I was going to do? I like to bite her, because frankly she does taste good and there is something about her flesh between my teeth that makes me want to growl while I bite her.

My bites are not a quick nip and that allow her to scamper away making faces and rubbing the spot. I like to linger, to dart my tongue out and lick her while I bite. I like that she moans both in pain and in pleasure when I do that. I like to change the pressure and make her wonder if I will bite hard enough to draw blood. I don’t of course, it is not healthy even though we are fluid bonded.

The part that is the best for the both of us is the marks. Even when the bite mark has faded it will leave bruises that she can’t stop touching. It is an actual imprint of me on her and that feeds our kink in oh so many ways. In this instance turn about however, is not fair play. She isn’t allowed to bite me, I leave marks, I don’t get them. Not that it would matter on some parts of my body since I suffer from partial congenital analgesia. I don’t feel pain from fingertips to shoulders in either arm. Hmm, maybe suffer isn’t the right word since I never have to worry my hands are going to hurt after an extended spanking.

You know what? I could go for seconds.

2 thoughts on “My Bite is Worse than My Bark”

@FawkesViolet There is a lag. Depends how close are to the actual server too. And have you tried dashlane for the passwords. I used to write them down in code but have found this to be brilliant