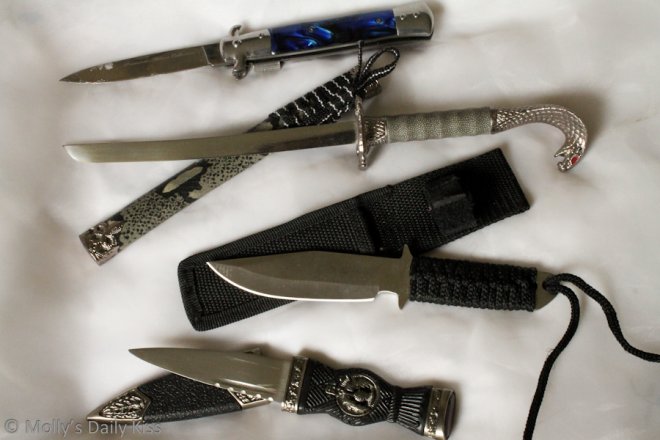 It is hard to find the space in my head to write about anything kinky right now. But I am going to try anyway. The kinky bit for tonight’s post was suggested by a locked twitter account.

Knife play. I love my chefs knives and knives in general but am nervous about their use in play.

We both love knife play because it fills both of our needs for mark and I think for Molly both the fact that it is marks that don’t come from impact play and the possibility of blood really works for her kink.

The Tweeter (Twitterer? Tweetee? ahh who cares) is nervous about using knives during play, and rightly so. Knives can do permanent damage and even worse. The trick I have found is that while the knives need to be sharp, they should not be carving knife sharp and never ever dull. Dull knives are oddly more dangerous than sharp knives. They can slip in unpredictable ways and even a dull knife has a sharp tip.

Since a lot of knife play is psychological I tend to have her face down when I start using the knife and so I use the back of the blade to begin with. The cold metal against her skin makes her shiver and that inevitably leads to the words

“Be still my love”

As the blade warms with the heat of her skin I begin to angle the knife upwards so the it is less the back of the blade and more of the tip and this makes the marks start to appear. It also makes her burst out into knife song “oooooOOOhhh” in a rising a descending tone. There is another sound as well, a bit difficult to describe, it is a tiny little bit like the scratch of an old vinyl record that you hear after the music has faded away. Once I have the gauge of how both she and the blade are going to behave I switch to the knifes actual edge. This requires an even greater attention to detail since injury from excessive pressure can occur very easily.

This, for me, is where the play really starts, the glide and flow of the blade over her skin, the welts that rise as I increase and decrease the force of the blade. I change the angle to one wear I slide the width of the edge across her like I am shaving her. It becomes a dance of metal, flesh, sound and maybe those tiny droplets blood that well up  from the tiny cuts I have made. I can get lost in this. 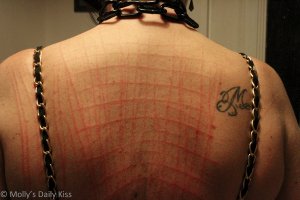 Whew, that got a bit intense. There are of course some safety rules I can suggest. Only do knife play on fleshy parts of the body, well away from arteries or veins. If you don’t know where they are, then look it up. We generally limit this kind of play to the back and buttocks area with some rarer visits to the breasts.  Never ever near the groin or neck, remember trying to explain to the authorities what went wrong is never fun.

I only use our knives on Molly since we are (very) fluid bound. If I am simulating a consensual non consent scene where that bad man in the alley is holding a knife to her throat I show her the evil knife, but use the back edge of a butter knife to provide the sensation. Kinky is good, but alive is better. Remember that we are terrible at knowing what our bodies are actually feeling. Ice can feel like fire and a blunt metal edge like a razor. You just have to convince them that you are doing bad things, even if you are not.

So to my Twitter friend, don’t use your Chef’s knives (except as props) and find a lovely blade and make it juuuuuust sharp enough to scratch. You will find it is quite a rush.

As always safety first, don’t be stupid. I hold no responsibility if you get it wrong and most importantly YMMV

@CharmerRocks Ahhh such a Charmer 😁