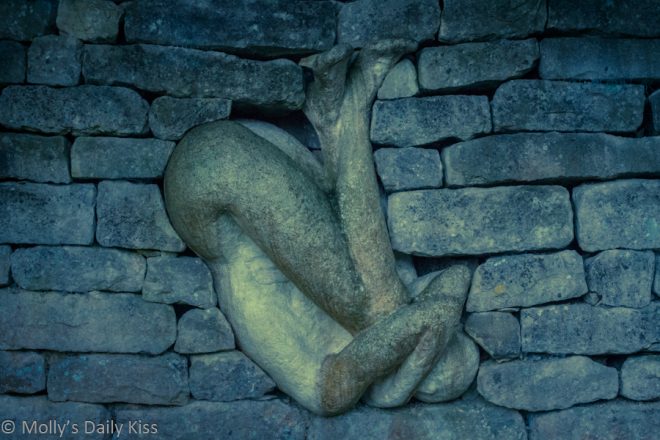 We all think less of ourselves than others (mostly) think of us.

I am no exception. I don’t like my body. As far as I am concerned I was never attractive and even when I was young and thin I still saw myself outside of the norm of accepted beauty.

I don’t think I am talented enough, skilled enough, beautiful enough, the list is endless.

Everyone wants the approval of others, even those that we hold up as the examples of what we should aspire too. All people want that affirmation, those of us that seek it want it from those that are perceived as having it and those that have it by seeking the approval of the rest of us. We are all flawed and broken. I think that is one reason why often the public takes joy in the downfall of those that have “had it all” because it shows that really they are no better than the rest of us. Then once we have thoroughly condemned them we move on to our next idol. I have seen up close how damaging it can be to live in that spotlight. I have heard famous actors privately denigrate themselves and their talent. It is an endless cycle of self despisal that they try to mitigate with public adoration.

It is all well and good to acknowledge that this is just the way people work, but how do you break free of that and find the satisfaction in who and what you are?

Sadly you don’t, you find ways of coping. Some are good and some are bad, but in the end I don’t think anyone really is content. On the upside I do think that this often drives people to excel, on the downside I know it drives many to just make it end. Sometimes it does both to the very same people.

How do I cope? Frankly by being nonconformist. I do the opposite of what most people do simply because joining in often feels like a form of surrender. I learned this trick when I started going to High School. I reinvented myself and if none of the popular people would accept me, I would reject them and find status and popularity among the outcasts. It worked well enough that I still do it to this day. It is something that I have learned I need to be aware of, my knee jerk reaction is to reject what is presented to me as the way to fit in and rail against it (see my long standing objection to suits and fetwear) I need to be careful that it is something I should reject. I know that some of my opinions on many topics has offended and hurt other people I care about. But after 43 years of perfecting this defense I often find it hard not to go there.

As far as I know I have never met anyone who is perfectly at ease with who and what they are and to be perfectly honest I would be very concerned if I met anyone who was. They are the people who believe their own press.

After all, we all have feet of clay.

P.S. Thanks to @marvydarling for the tweet and conversation that inspired this ramble as well as all of the other wonderful people on twitter who joined in.

One thought on “Feet of Clay”

Really no one is going to indulge in my bulge kink and share their thoughts for #KOTW Surely I can't be alone in my love of them? kinkoftheweek.mollysdailykiss…

@StephanieAlys Yes. I tweeted this morning too about my daughter and her friend being trailed along the street by 2 men in a car and then called sluts. They were 11 years old. I don't think age changes anything either end of the spectrum.

@StephanieAlys it was 11am, broad daylight, I was about 150 yards from the road & I had the dog with me. But he was alone, no dog, just standing there. I double backed and went out the other exit. That is reality of being a woman in this world I think. And it is NOT fucking OK Hugs to you