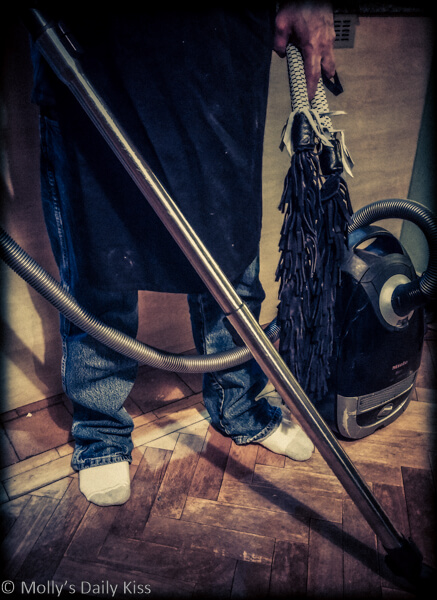 Ahh the age old dilemma, who does the housework? And doesn’t D/s make the division of labor easy? Surely Molly as the Twue sub she is handles all that stuff while waiting on me hand and foot?

That would be a resounding NO!

This post was inspired in part by GotN and her rant on chores and how the penile equipped among us don’t do our share and expect the women folk to pick up after us, that the claim of not noticing the mess is in and of itself a symptom of having someone else just sigh and do it for us. So as we often do, we had a conversation about this and discussed our difference on cleaning.

A bit of background for context, while I am a gentleman of advancing years this does not mean my childhood was that of Father Knows Best. I am the oldest of four children, I have two brothers and a baby sister. My sister is just over ten years younger than I am and her arrival caused a great change in my life. By the time she came along my parents had given up on ever having a daughter (all of her older siblings were supposed to be girls) and both my parents had fulltime day jobs There was no way the family could get by on just one income. So what was the solution? Well, that would be me. My mom would drop my sister off at the neighbors house and head off to work, I would herd my brothers to the school bus and we would all go to school. Once school ended I would take the bus home and pick up the baby and go home to watch my brothers and take complete care of a ten month old child, and make dinner, and do laundry, and clean the house. This continued until I got a job at fourteen that started directly after school. Once I was employed it got me out of making dinner but that was about it. I still did the laundry and general cleaning. What an exciting time it was for me when I finally graduated High School and left home for Boston and College. Most of the excitement centered around the fact that I would only doing chores for one!

Flash forward a few years and I am married and very quickly a father of two. My wife had many admirable traits but she was not one who cared all that much about cleaning and so once again I found myself taking on most of those tasks. It wasn’t any big deal, just what needed to be done.

I never ever expected anyone to “do” for me. I had spent my whole life not just doing for me, but for those I cared about around me.

Molly and I are partners in all things, she is not someone who I would ever expect to wait on me (we do sometime wonder about looking for a service sub). We both work from home and she works every bit as hard as I do (often harder) and since I don’t drive here in the UK she has the added burden of trucking the kids all over hell and gone. She does do all the laundry and cleans the bathroom. But I work hard to let her know how much I appreciate that and try my hardest to do my fair share, to listen when something isn’t quite the way she would like it to be and to do my part to show that this is joint effort.

What, you may be asking yourself, has this got to do with GotN?

It is the notion that somehow (notallmen) we have spent out lives with someone picking up after us and so our differences in what needs to be clean and when it needs to be clean and how could we not notice the giant cobweb that hangs down just above the kitchen table is a result of Patriarchy. It certainly isn’t true of any of my peers that I grew up with. I don’t know a single one of them that expects cleaning to be done for them and in our discussions on the topic really the only person that Molly and I could identify as someone who did expect that was her ex and well, really, I hope that the people like me outnumber the people like him by a great margin.

But here is my dirty little secret. I don’t care about cleaning. In those rare moments in my life that I have lived on my own-ish I would happily fall into the dirt blind stereotype that is manhood. I, in fact, need a bit of chaos and mess in my life to function properly.

So maybe the difference isn’t down to gender or what we have been taught to expect but just down to what we do to compromise to make the people we love happy.

After all the messiest most dirt blind people I have ever known in my life, were all women.

P.S. I am a great fan of GotN, I admire her boldness and honesty, and even when we do not agree on an issue it never is because she doesn’t have a well thought out argument or that she wont hear an opposing respectful view so I hope she takes this in the spirit it offered, just another possibility.

Also, I love her new book! More on that soon 😀

6 thoughts on “Division of Labor”