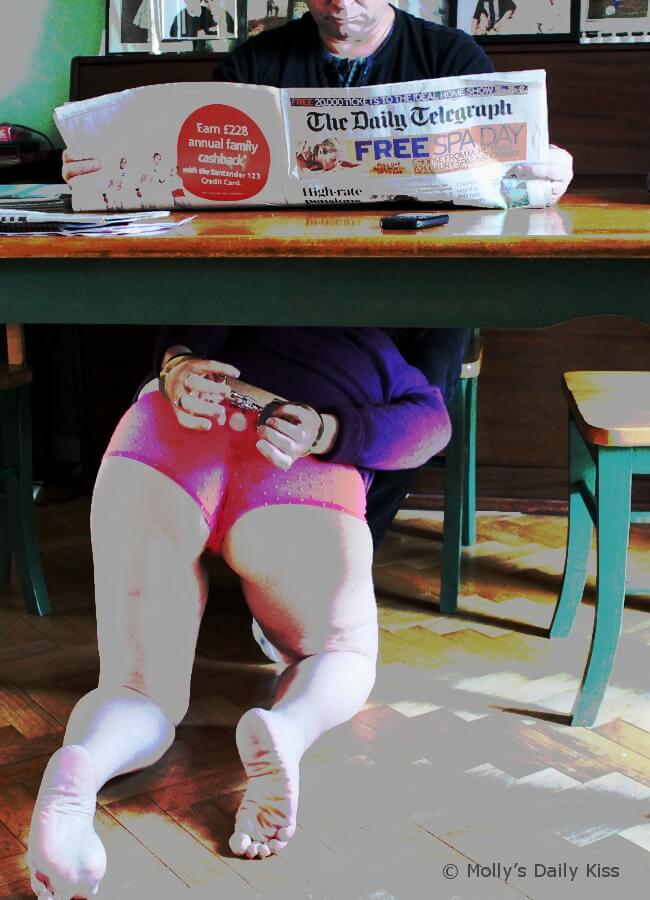 It was another beautiful day on the Uberdom estate as he stirred in his bed. Climbing out from the ten thousand thread count sheets, the subbies clinging to him moaned in disappointment as he wriggled from their grasp.

“But it was my turn today Sire” sub number 42 grumbled as his permanently erect cock slipped from her lips.

“Disappointment is a subs lot”

he said aloud and his quote subbie tweeted that bon mot to the eagerly waiting world.

He stood by the bed as his dressing subs pulled on his skin tight leather shorts and vest. He paused for a moment to admire his amazing physique, so superior in every way. So much so that all other men, even those that considered themselves Alphas acknowledged their beta status at a single glance.

Satisfied that he was still the golden god he had always imagined he strode through the hallways of his stately manor that had been given to him by some repressed billionaire who had lost his parents at a young age until a chance encounter with Uberdom had cured him of his flying rat fetish and restored this broken young man back into the good graces of society. As he approached any door it was quickly and obediently opened for him by the eager door subs who groaned appreciatively at the chance to serve such an exalted personage.

“Some strawberries and granola” he said to his feeding sub, “and the Telegraph I think”

“Yes Sire” responded the reading sub and she started to read Uberdom the paper as he ate his morning repast.

He remarked to all the subbies in earshot who nodded in enthusiastic agreement.

“But with their new push to ban all kinky spanking sites and killing off mandatory sex education, why my pool of uninformed subbies should be full for decades to come.”

Uberdom fell silent as he considered his coming prospects, the future, as far as he was concerned, had never looked rosier.

“Today’s kinky play shall be… Denial”

You could have heard a pin drop across all of Uberdom land, but if you listened very very closely you could almost hear the tiny tears of all the twue subs as they learned that once again the Tories had ruined their day.

One thought on “It’s Not Just River in Egypt”

82. Petrichor When it finally comes this year it is going to be intoxicating