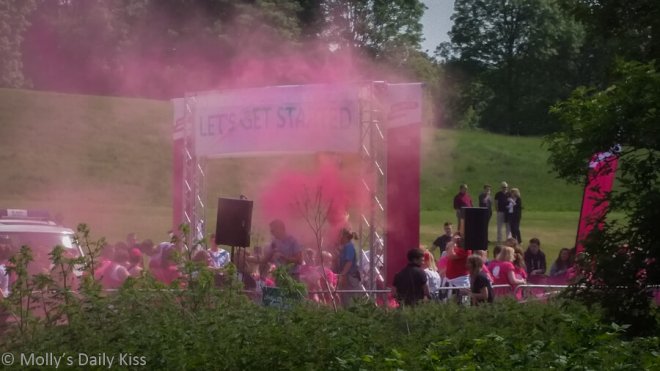 I am rather proud of her.

Last Sunday Molly and her daughter took part in The Race for Life. I am sure you all know my stand on exercise, but not withstanding my opinion doing this run mattered to her. That meant it mattered  to me.

She is an amazing woman, but like the rest of us she has worries, about many things but often about her body and weight, now I think she is amazing and beautiful. But sometimes people need to feel that about themselves. No amount of external validation will make someone feel better.

So while I am not a fan, I encourage her workout routine and praise her on the improvements in running time and even listen to her explain her Gym Domme’s™ latest workout plan. When she told me about running the 5k I knew that she would be worried about that as well, because while she runs five miles on her running days that is on a treadmill and not out in the world and the world has turns and hill and obstacles.

To me this was a no brainer, I knew she could do it and do it easily. So Sunday came and we headed down to the park for the start of the race. We listened to the silly DJ pimp himself and the booths at the event and once he was done talking there was a bit of a warmup by a local fitness club owner. Then it was time to begin. They started all the runners off in a sulphurous cloud of pink smoke and Molly and the StepD were right in the middle of the pack.

I sat comfortably on a bench holding their sweatshirts while they headed off and played on twitter (my idea of exercise) and was surprised when they announced the first runner crossing the finish line a mere twenty minutes after the race had begun. That made my mind kick into gear and I started doing some math. Molly manages just over eight kilometers in just under an hour, so If I wanted to welcome her as she crossed the line I had best get into place or I would miss it.

Sure enough 38:57 after she departed she was back, looking flushed and pleased and proud, saying:

Like it is was surprising, and maybe it was to her. But it certainly wasn’t to anyone that knows her.

So I hope you will forgive my post of pride in her accomplishment, but I think she needs to know how proud she makes me everyday and this just gives me an excuse to share it with all of you.

5 thoughts on “Pride of Place”