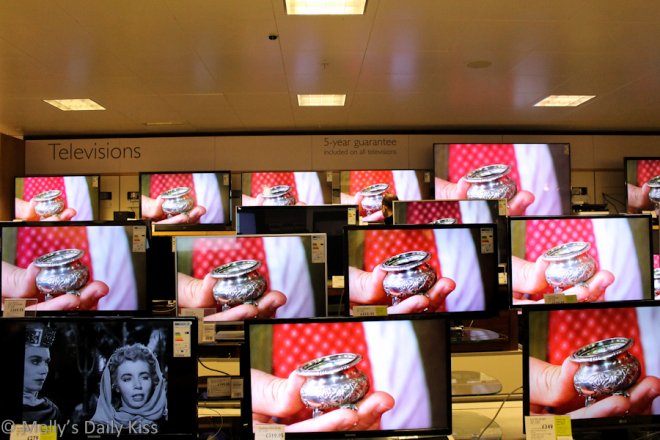 It might be obvious, but Molly and I are out about our kink and not just a little bit out. But in the press out.

We were the non-weird kinky couple in Channel 4’s Fifty Shades of Grey: A sex story. We were in Closer Magazine, Molly has been in Salon, and Glamour and I have been interviewed by the Telegraph. This isn’t to toot our own horn, but to discuss what it is like dealing with the media while kinky.

It isn’t as simple as it should be. It turns out that (and I was astonished by this) reporters aren’t always looking to present you in the best light. Shocking isn’t it? We have always been very careful to discuss with the reporter or producer what their goal is and so far we have been pretty lucky. We have also turned down appearances that have just sounded off.

The one example that spring to mind was a TV show called The Sex Box. The premise was that you and your partner went inside the box on stage in front of a panel and a studio audience. Had your specific kind of sex while the panel discussed your kink, then you came out and had a post-coital chat with the panel. When we were first approached we were interested because the panel included Dan Savage. But the more we talked to them the less comfortable we became with what the goal of the show seemed to be. It didn’t feel to us so much like they wanted to show normal people happy with their kink as it felt like they were just going for the weird factor. So we declined (sorry we never got to meet Dan) and after watching a tiny bit of the show we were very glad we did.

Our goal is to make people understand that who we are isn’t something to gawk or on sneer at. That we are not ashamed of our kink. That if you come to dinner with us we aren’t going to tie you up (unless that was pre-negotiated) and have our wicked way with you. That we aren’t looking for converts and there is no free toaster for every tenth vanilla we bring over to the darkside. Sadly that doesn’t really sell as many papers as the shock and outrage the media is looking for when dealing with alternative sexual lifestyles. That is the sad truth of it.

But we will persist and try to show that we are not a threat to society and that the ideals we hold of communication and consent are valid in all relationships.

Not just in our kinky one.

15. My mums steak and kidney pie