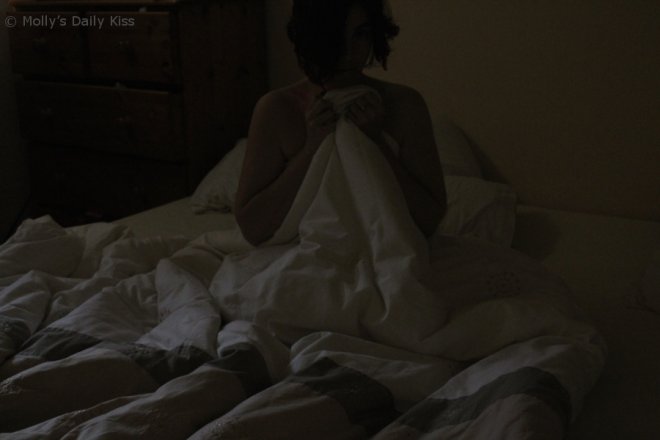 Molly was a bad girl today. She had a few phone calls to make and work to do. But her bed was warm and snuggly and Twitter and Instagram had caught her attention. I called her from downstairs several times and she responded with a cheery “I’m coming” every time  I called. Even when I had made the morning coffee and called again she did not appear downstairs.

I have mentioned that we don’t do a lot of rules, that doesn’t work for either of us. But when she is told to do something I expect her to do it. It seems that I might have been giving her too much slack and so after the final warning I went upstairs to our bedroom.

She was still under the covers and still on her phone. She could tell by the look on my face that I was unhappy and she said “I was coming” “No you weren’t I replied and pulled the covers back and flipped her over. After just a few smacks on her bottom she said her safeword so I stopped and she explained that she couldn’t keep quiet and that her son was still asleep. “We aren’t done with this, there will be more later. Now come downstairs” was my reply

She meekly followed me down to the kitchen where her coffee was waiting and we started our very busy day. She did her phone calls and a Skype call and other work that was on her list. We had our dinner and then it was revealed that the teen was spending the night at a friends, so she whisked him away and returned home.

I told her that I has a task for her and told her to fetch the wooden spoon. “Oh no Sir, please not the wooden spoon, can’t I have something else?” Since I had written about the “Cheese Grater” recently I told her she could choose between those two items. She chose the grater saying ” I am sure I am going to regret this”

After about twenty minutes of medium strength paddling and muffled cries of “I’ll be good” I stopped and gave her bottom a few minutes of caressing. “We don’t have a lot of rules, do we my love?” I asked. “No Sir” she snuffled. “And when I tell you to do something?” “I will do it Sir.”

And she will. I will make sure of it.