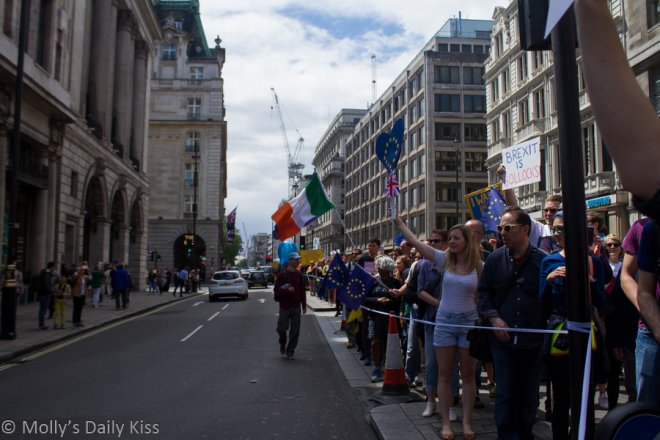 The right to protest is much more than a right in my opinion. It is the solemn duty of anyone who cares about their country. I won’t use the word patriotic, because too many people have tried to lay claim to that word and turn it into something it is not, blind obedience to the government in power.

When I moved to the UK I retained my US citizenship because the US is not good at sharing and will not allow me to have dual citizenship. This means that while I can vote in US elections (already cast my ballot) I can’t vote in UK elections. But that doesn’t mean I can’t shout at the Government when they are making huge mistakes.

And the best way to do that is to protest. Molly and I have attended two protests so far in my five year sojourn in this country. The first was a rally to protest the ATVOD changes in law that made face sitting, along with other things illegal to view in online videos. The amazing Pandora Blake was targeted by these new laws and was forced to close her spanking site. She fought back and won, well at least for now.

Then came Brexit, the horrible, terrible decision that the UK, or at least an ever diminishing part of it should leave the EU. So I dragged poor Molly and a few other hardy souls to try and show that once again the Government is making a boneheaded move. We were joined by quite a few lovely and wonderful people who felt the same way as we did. We also had a lovely lady share a fine view of her naked body with the crowd from her hotel balcony as we waited for the march to begin.

Now we all get to exercise this right yet again. Because the Tories are marching us bravely into a future where we are all protected from seeing that dirty, nasty sex in the form of a new piece of legislation called The Digital Economy Bill. I’m not going to go into detail about it because Pandora has written about it far more eloquently and intelligently than I possibly can. Go and read that link because it matters to all of us, and maybe click the button to support her while you are there.

So here is the message from the amazing Myles Jackman:

This might look silly, but getting in the press requires getting attention and this should certainly do that.

So what do you think? Are you going to stand up for your rights?