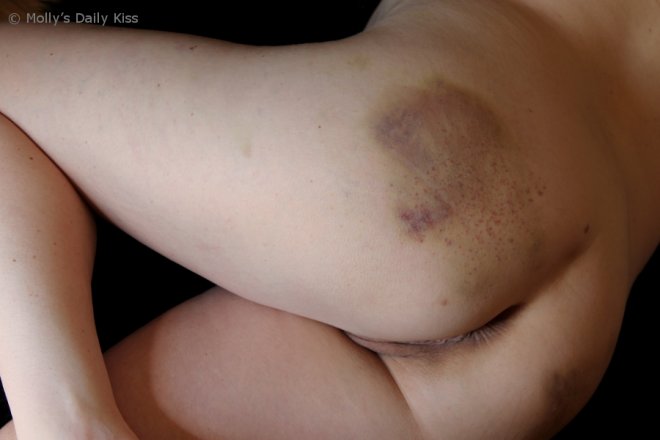 I have a need, it has been growing for a while. I need to mark her. This feeling has been building for sometime. Not just a few swats with the belt when we have a few moments when the kids are not home. But a serious, long session. It has been too long since we have done that.

It starts as a nagging feeling in my head that something just isn’t right, and that feeling only intensifies as time goes on. I begin to feel a little restless and unsatisfied. I get distracted and lost in my head a little bit. The next phase is when she passes by me or bends over to pick something up and I see her fine, fine ass and that is when it hits me.

I want to hit that. I want to leave welts with the crop that make her howl as she gets them but also make her trace the marks and smile afterwards. And oh man, that moment afterwards when she says “I was very good wasn’t I Sir?”

And she will have been very good indeed, because she has to fight to take it. She doesn’t want to fight but she has trouble finding that place where she can just lean into it. It is always a struggle, because she wants it all so much but well, the only way to get the marks she craves is to make it through the pain. But we always get there in the end.

Now don’t think that the beating is the only thing I have in mind, I have become more appreciative of the forced orgasm as of late so I think that will have to feature as well.

Knowing that this just where we both belong.

2 thoughts on “I’ve got a feeling”

Sunday Story-time (Beneath the picture you can find an audio recording of me rea... onlyfans.com/mollysdailykiss

Day 341 #mollys365 "The most beautiful experience we can have is the mysterious" ~ Albert Einstein pic.twitter.com/G3CJHXwTHR