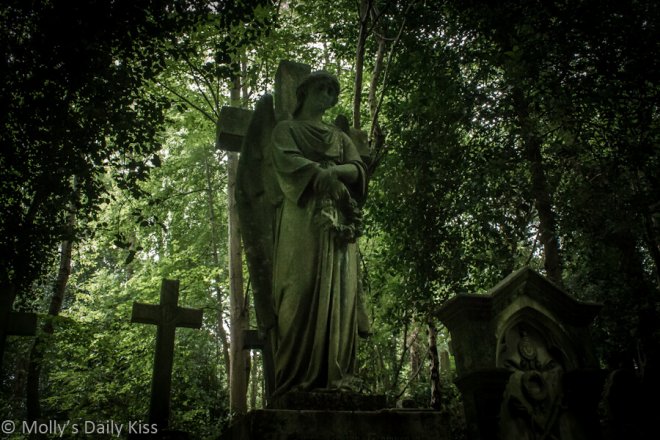 She was always fascinated by graveyards, those empty, lonely communities inhabited by the dead. Where the living only tread in the full light of day as its true residents lay quiescent beneath them. She wanted to fuck there in the dark under a sky lit by a full moon, our bodies moving together hot and sweaty and full of passion. The audacity of this act of life made only sweeter by the contrast of a place meant to honor the absence of it.

That is why she was attracted to me.  When she found me, watching her from the shadows in the clubs, always lurking, never engaging. She would always seek to draw me out, for her exhibitionism was meant to tempt, to make the voyeur become a participant.

The first time she overcame my reluctance it was in the alley outside, her mouth hot on my cock, her eyes never leaving the people coming outside to smoke and watch her, because she did not exist without an audience. The second time was in the clubs dirty toilet while men came and went, bent over a filthy sink so she could look in the mirror while they relieved themselves of their rented beer as I fucked her from behind.  Each time more public than the last. To excite those around her as much as it excited her. Her orgasm always more intense when witnessed.

That is why the graveyard held such sway over her, the ultimate act of exhibitionism for her. The ultimate voyeuristic audience. Only ever able to watch, never to partake.

So I took her there, among the abandoned dead. The very act bringing life to blot the darkness, so the lost souls left there to molder alone could taste just a little of life’s joy in their dust filled mouths.

I wonder if she is happy now that she has joined them?

6 thoughts on “The Abandoned Dead”