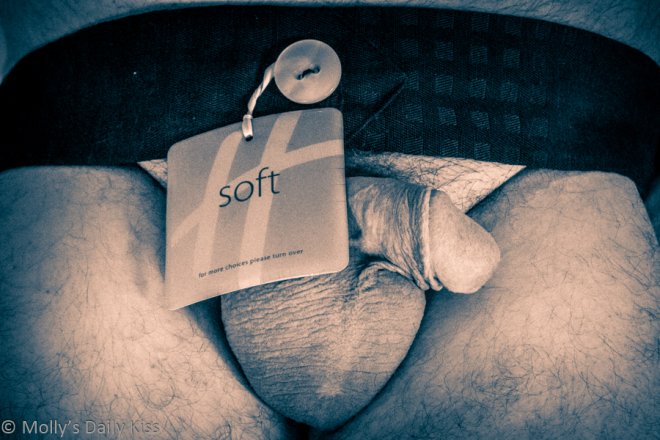 Molly wanted me to write a post about CBT for kink of the week. I don’t do CBT, neither do I give it, nor do I receive it, well at least not on purpose. I did think I would use today as a chance to tell a story that might be at least slightly germane to the topic.
A very, very long time ago when I was twenty two and a father for the second time I decided that the combination of birth control pills and condoms that my current wife and I were using were obviously not cutting the mustard. So I decided that the best course of action was to have a vasectomy. It was far less intrusive surgically speaking than her getting her tubes tied not to mention that my insurance would cover a vasectomy but not tubal ligation.

After many meetings with my doctor who was very unsure about doing this procedure on such a young man I finally convinced him that this was indeed truly what we wanted. There were various levels of vasectomies (I was unaware of this) I could be cut and tied off, cut, burned and tied off, cut tied off burned and stainless steel clips. I opted for the full range. With that settled I scheduled the surgery.

We were wildly poor in those days. I worked two jobs, in the day I sold auto parts and at night I did sound for a local band. Since this was in the very economically depressed early 80’s I could not miss a day of work or I wouldn’t get paid.  My week was scheduled like this, Monday through Friday 8am-5pm sell auto parts, Wednesday through Saturday 8pm-2am do sound. Luckily there was one Saturday we weren’t gigging  on so that was the date.  But I had to be back at the day gig on Monday. So I was set to go to the hospital early on Saturday morning.

I was very tired having gotten in from my gig well after 3am and I had to get early up to shave my testicles (I had a prep sheet) I arrived at the hospital and exchanged my clothes for the ubiquitous backless gown of shame and soon found myself in the operating theater confronted with something that looked like a dentists chair but had some rather high footrests for my feet. I am sure you lovely ladies reading this are laughing already, for the rest of you I have one word, stirrups. Yes, that’s right, for the first time in my life I was going to be in a position that I had never been in before, feet up legs spread and exposed for all the world to see. The nurse made sure I was settled in properly and then did something that rather shocked me. She sat down on a stool between my legs, lifted up my gown and said.

“I just need to make sure you’ve done a good job shaving.”

After recovering and while she moved my bits about I managed to say.

“I tried my best to make sure the doctor would be able to see where he was going, I don’t really want any mistakes.”

“You did a fine job indeed” and dropped my gown and made some notes on a clipboard. She then stood up and left the room. I waited there for the best part of twenty minutes, but oddly I was rarely alone, over the span of this time several nurses came in, flipped up my gown with the comment that they too were checking that I had shaved adequately. This happened more times than I thought necessary, but what am I going to say being mostly naked and in stirrups?

Eventually the surgeon arrives, I get my shot that makes me not care what is going on and I mean really not care. I had some seriously inappropriate conversations with the nurses. Then the cutting, tying, burning, clipping gets done in a (what seemed to me) very short time and I am helped out the the chair and wheeled off to recovery.

My father in law picks me up and takes me home to the family and when I arrive at home there is a bit of a crisis with the boy child and so I am handed my six month old daughter to hold and she is wearing those solid white leather shoe, you know the ones I mean, the type that get bronzed for keepsakes? Well this precious bundle of joy starts to get over excited and swings those shoes (which upon reflection must be made of lead) and kicks me, right in my newly snipped crotch. My happy drugs have long since worn of and I crumple to the floor, being very careful to keep the little angel safe and whimper “take her”

Now over the many years that have passed since this incident I have told this story many times, and the part that had always confused me was the nurses excessive interest in how well I had shaved and no one ever had an answer as to why that was.

Until I told this story to Molly. She cocked her head at me and said.

“Has no one ever told you?”

“That your nuts are massive”

I have never stacked mine up against anyone elses, so I guess I will have to take her word for it and I suppose she might have had more experience than I. After all, she does love cock.

2 thoughts on “A Close Shave”