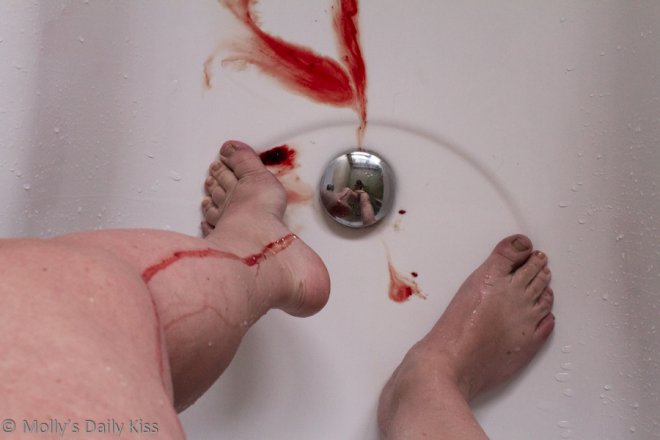 So we all agree that sex is messy right? That doing the dirty deed is going to result in fluids and sweat all over us? Well that is what sex is to us anyway. I know that there are those that have issue with the stuff that comes out of the human body, but if you spend any time as a parent you will get over all of that pretty quickly.

So why is period blood such a big deal?

I have no idea at all. Now I suppose there are some people who have issues with the sight of blood. I have known tough people of all genders to get woozy when they see the red stuff, but that has never been the case with me. It would be very inconvenient if that were the case since my condition means that I bleed all the fricken time.

When I first met Molly she was very unhappy when she got her period (she still is in a lot of ways) and when I asked why, she told me that it meant we couldn’t have sex. My response was “Who gave you that silly notion?”. It turns out that it was most of her prior lovers. The prevailing opinion was that it was not something that they were willing to do.

This was bewildering to me, sure you had to put down a towel so as not to stain the surface you were fucking on and there was a bit of clean up for me so that I didn’t make a mess, but so what? Miss out on sex because of a bit of blood? Get a grip. Seriously, you expect women to put up with your come EVERYWHERE and they are supposed to love it, but if you get a bit of blood on your man bits and you lose it?  It boggles my mind. You don’t mind fucking her in the ass right? Do you know what comes out of There? That doesn’t seem to put you off.

I would love to hear a serious, actual case be made about why this is an issue that at the end of the day doesn’t come down to “Ewww” because I got nothing.

6 thoughts on “There Will Be Blood”

The Kisscast is back! Listen to all the Episodes, old and new. Molly Answers the 30 Quick Fire Questions is.gd/r9Ps0f