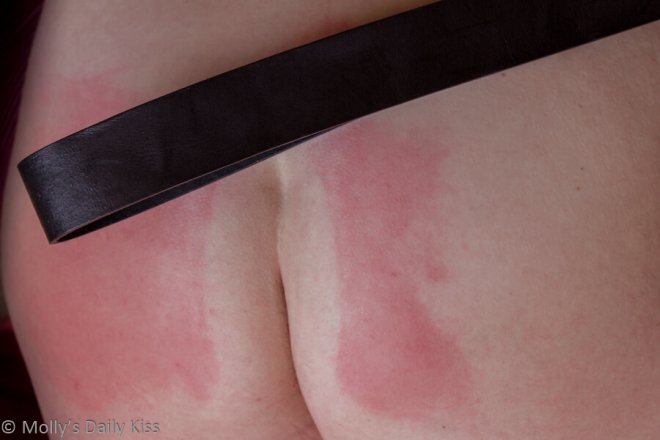 Mr Mann walked to the door of Abigail’s Cell, pulling off his belt as he stepped through the doorway.

“Frankly Abigail, I am glad it is you, I have been looking forward to this ever since I grabbed you, and to be completely honest I prefer brunettes”

“Fuck off you twat, I’m not taking any punishment” she shouted as he moved towards her. “I never agreed to this stupid game”

“None the less, this is going to happen and it can happen hard or it can happen easy. I would prefer a fight Abigail, I want to feel your body struggling until you surrender to me.”

“Well come on then if you think you’re hard enough”

Mr Mann chuckled. “I do think I will be by the time we are finished”

With a final few strides he closed the distance to the bench where Abigail struggled and cursed. Since she was still secured by her ankles all she could do was swing her arms and upper body wildly as he approached. Mr Mann’s grin grew broader as he stood just outside her reach.

“You will be taught to obey” He said with a grin. “They all obey in the end”

Pressing the release on his remote her ankles were suddenly free and she leapt off the bench and tried to run. But somehow he had anticipated her movement and grabbed her around the waist and threw her over his shoulder. She beat at his back and his head wildly trying to break free. But all he did was laugh

“Is that all you’ve got little one? I am sure you could try harder”

Those words enraged Abigail and she redoubled her efforts, pulling his hair and trying to bite him.

“Now that is the little spitfire I was looking for! I like a bit of fight before the main event”

Mr Mann swung Abigail around and sat down on the bench with her stretched across his lap. She twisted and kicked but her position made her feel helpless and he held her firmly around the waist with one hand. Her toes could just touch the floor but her hands were too far away to make her feel balanced.

She was utterly unprepared when she felt the first impact of the belt. It caught her right across the center of her ass and burned like a brand had been applied and she gasped with the pain of it. There was no time to even scream as the next blow swept across her bottom and the next and the next.

Mr Mann was relentless his arm rising and falling sweeping the belt down and across her bottom, each stroke leaving behind the distinctive double red lines that only a belt can make. The whole time he kept a running monologue up.

“I make bad girls good. It’s what I do and all girls are bad until I make them good, it’s axiomatic. Once they are good they do as they are told and then it’s not punishment” At first Abigail could think of nothing but the fire on her bottom and to keep breathing. Each blow seemed to force the air out of her lungs leaving her to quickly inhale before the next impact came.

It all blurred into a rhythm, smack, gasp, breathe. Over and over it repeated all the while Mr Mann never stopped his refrain.  “I make bad girls good. It’s what I do and all girls are bad until I make them good, it’s axiomatic. Once they are good they do as they are told and then it’s not punishment”

Then something started to change, it stopped being a fire. It slowly became a pulse, a throb that moved through the core of her, a new a different kind of heat that raced through her and with this change came a kind of separation as if she was floating outside of her self. A observer rather than a participant but still connected. What she noticed next was that Mr Mann was very hard. She could feel his cock through his trousers pressing against her naked body and that only added to the building heat. His cock seemed to throb with each stroke of the belt and that excited her. She moaned as he relentlessly whipped her bottom and instead of trying to escape she started wiggling her body against him.

As she said these words she could feel his cock shudder and come right in his trousers, she had made him orgasm by being a good girl. The male smell of him filled her head and made her squirm all the more and he dropped the belt to the floor and thrust his hand between her thighs pushing his fingers into her cunt.

“Oh Mr Mann, it feels so hot and so good. please make me come please Sir”

“Now that is how a good girl behaves Abigail, come for me and you will see how nice it is when a good girl does as she is told”

She squeezed the fingers inside her as hard as she could and that was all it took to push her over the edge. She came, hard and intense, the ache of her bottom making it feel as if she would burst with the agony and pleasure of it all.

He picked her up gently and lay her back on the bench face down and carefully reengaged the shackles. Abigail just lay there panting trying to understand what had just happened to her. Her whole body seemed to pulse with every beat of her heart as she drifted. He reached down and gently stroked her hair before picking up his belt and sliding it back through the loops on his trousers.

He strode away turning the lights off in the room leaving the two new trainees to sleep and wonder what the rest of the training might be.

The story so far