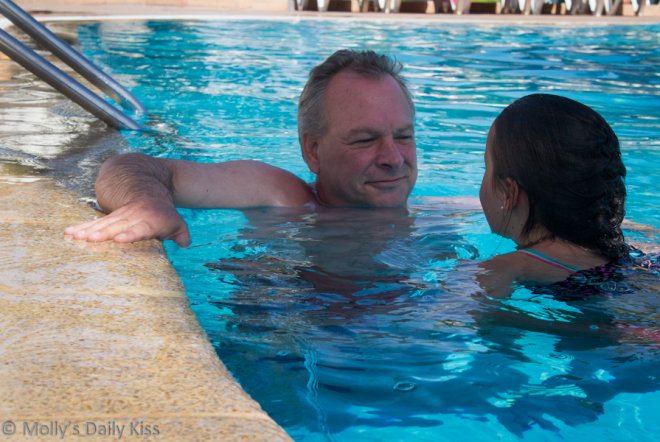 My Father sucked, never once in his whole life did he tell me he loved me. He never told me that he was proud of me or that I had done anything well.

My Father died relatively young at the age of 62 in a hospital in North Carolina. I had to make the decision to pull the plug.  Now my dad had his share of health issues and retired at a very young age after having 4 heart attacks. No one was surprised that he had heart attacks, he was extremely tightly wound. Oddly it wasn’t the heart attacks that got him in the end, but Rheumatoid Arthritis.  He was miserable and grumpy and constantly disapproving of me and my younger brothers. He doted on his youngest child, his lone daughter. My parents had never wanted sons and kept trying for a girl, but I am not sure that even that final success made him happy.

When I got the call from my mother that he was very ill and that we needed to come before he died I was surprised. In spite of his health issues he had always seemed invincible to me, that he was just to miserable to give up so easily.  By the time we had made the drive from PA to NC he was in a coma and on a ventilator and the doctors said it was time to make the call. My mother and all of my siblings said the I had to make the decision.

So I decided that I needed to ask him, to at least try to give him a voice in what was going to happen. I stood alone with him in the hospital room and held his hand and said.

“They tell it it is time to let go, but I need something from you dad. So if you can hear me at all here is the deal. If you want to fight on, just squeeze my hand, even the smallest bit and I will tell them no. Otherwise you are going to have to wake up tomorrow on your own because as far as the doctors are concerned you are already gone.”

There was no squeeze.

So I went out and told my family that tomorrow would be the day.

My mom spent the night with him in his room, mostly having one last snuggle with him. But in the morning much to everyone’s surprise he woke up. He woke her up, she called the doctors and they removed the breathing tube. By the time we all got their from the hotel he was talking and grumping just like any other day. To say that we were all stunned was an understatement.

We spent the day in the room with him, he even brought up the day before.

Sadly he said those words to my younger brother. No one told him, you don’t tell a very sick man who was in a coma that he was wrong about which of his sons it was.

We left the room late that night confident that he would be around for a long time to come. That was not the case, in the middle of the night we got the call that his lungs had failed again and that he wasn’t able to take enough oxygen to make it.

So I found myself in the same position, but this time it was real.

I told the doctors that it was time.

So alone in my fathers hospital room I held his hand until he stopped breathing.

I spent a moment with him and stepped outside to let everyone else know that it was done.

I hope that in the end I did what a good son would do and set him free.

Whatever else I learned from my father, I learned how to be a better parent.

@ht_honey Haha.... Both independently and together!