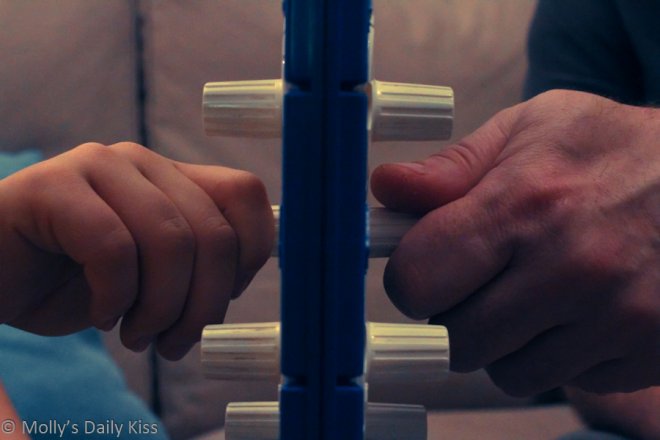 Around our house I am the Tech Department. That involves much more than fixing, well, almost anything that breaks even if it is a stretch to call it technology. That also means that I need to keep Molly up to date on technology in the wider world so that when it is mentioned on twitter or other social media she is at least aware that it exists.

This is mostly easy for me as I devour a steady feed of news and information on a huge variety of topics each day. I have also had years of experience in explaining the geeky stuff in plain English to one of the most difficult and obstreperous client bases, University Faculty. So explaining most of this stuff to Molly is, by comparison, relatively easy.

With one exception and that exception is fairly relevant to this tale. No matter how many times I tried before I have never managed to help Molly understand Geocaching. I have used multiple metaphors and illustrations to explain and she would look and me and say “OK” but in that way where I just knew that she was simply saying it so the conversation would be over .

Then Pokemon Go crept onto the scene and I knew that this might be a tough one. I have to first explain the Pokeman phenomena (my kids were just the right age) and then Augmented Reality as well as a bit of Geocaching. I figured the game part would be pretty easy, after all Molly is who the kids turn too when they can’t get past the hard level on a Nintendo DS game (I know, who would have thought of Molly as a gamer?) so how hard could this be?

So as we are in bed snuggling down to sleep I decide that it a good time to broach the delicate Pokemon topic.

“Have you ever heard of Pokemon my love?”

“Wasn’t that a video game?”

“Yes, you had to catch monsters and train them to fight other monsters”

“Okay, so why is this important?”

At this point I try to explain how Pokemon Go works and how it has become very popular. I will attempt to explain it to you right now.

You download a game to your phone and it uses Augmented Reality, which is using the camera in your phone to view the world around you and adding objects into the picture that aren’t really there, in this case Pokemon for you to catch and collect and train. The interesting part is this game makes you go out into the world and play it. It uses your GPS to track your location and gives you geocaching like clues to find the Pokemon for you to capture.

“Oh, Geocaching, remind me how that works again?”

I once again attempt to explain how it works with about as much success as I have in the past.

Which is to say, none at all.

But I seem to have explained Pokemon Go just fine since she attempted to download it the first thing in the morning. Luckily for me it is currently not available in the UK.

Otherwise I might never see her again. I don’t want to lose her to the other DS

P.S. by Molly… I am slightly concerned that this post makes me sound like a Geocaching numpty which I am not. I get the concept of it but it just sounds a bit haphazard. You hide something (anything, what? why?) somewhere (anywhere?) you leave cryptic clues on websites and go home and have a cup of tea or you follow other peoples clues and find what they have left for you not that you will know what that is until you find it, so your guess is a good as mine…. So I get it, I just don’t GET it!

5 thoughts on “The Games People Play”

5. Bruises left by a meany

4. My doggo. So so much love pic.twitter.com/lY6Vl1Wd1c