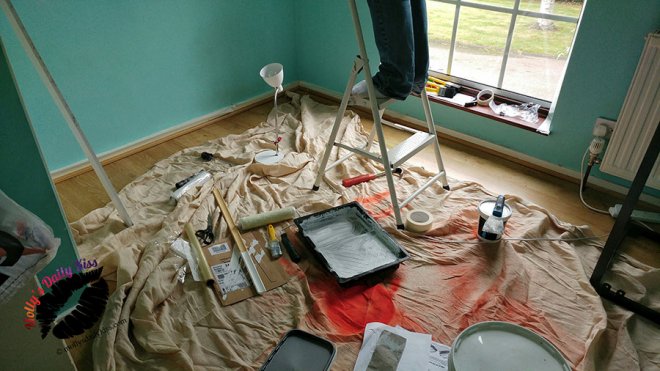 Part of the stepson’s gift for his birthday was redoing his room. He does have the smallest room in the house and has been living in a cramped space with a loft bed for many years. He has mostly been fairly tolerant of the situation but eventually we decided something needed to be done. We looked into adding an addition to the house downstairs but the quotes came back so high we could have bought him his own house in the US.

So I suggested a Murphy bed (Wall bed in the UK) so that we could increase his living space while he was not sleeping. We added a wall mount big screen to increase the bribery level for him. That seemed to sway him to the side of moving forward, not to mention that an addition would have taken months and this could be done fairly quickly.

So we ordered the bed which came two days later and so the disassembly of his room began. I always knew that this would be the tricky part. Molly hates mess and disruption and we have had to empty the accumulation of many things once prized but now a bit forlorn. And all of this crap is scattered all over the house. This drives Molly mad, but she has been a trooper.

We finished cleaning, filling the nicks and scrapes in the wall, I have drilled many (hopefully in the right place) holes in the brick and plaster wall to secure all the new hardware and repainted the ceiling white. In other words we have busted our asses to get this done as quickly as possible. With any luck we will repaint the walls, hang new blinds and actually put the new bed and TV in place in time for him to maybe sleep in his room instead of on a mattress in the living room.

Oh, and the In-laws are coming to dinner to celebrate his birthday.

Yeah, I know, we are mad. But you know what, we are mad together as a team. She has suppressed her desire to run away screaming at the mess and disorder and been a real trooper. I have been as helpful and efficient as possible as we have each handled our respective duties without a single cross word between us. It hasn’t been very D/s but it has been oddly a pleasure to work together towards our goal.

We have been a team and that makes all the difference.

In every thing we do.

P.S. Since we are under construction the post is late, and Molly says I have under played how much all of this freaks her out.

Someone asked me to update my @TheKnickerFairy wishlist..... So if you want to treat me then here you go wishlistknickerfairy.com/wish…

Go back to -10.30 ish and you get to see these beautiful owls in action twitter.com/silverpebble/s…