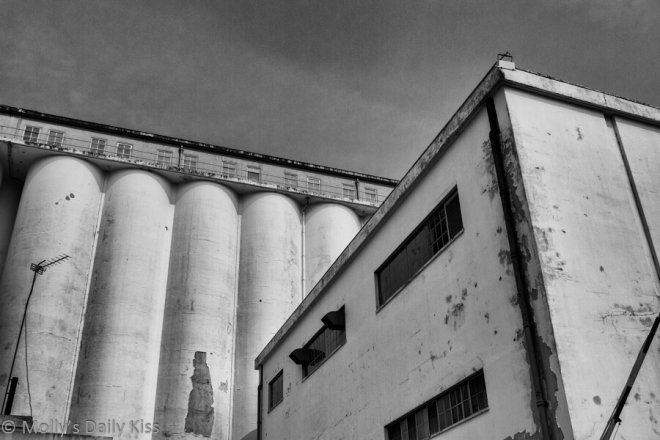 Continued from The Grey Man

The building had been empty for nearly a decade, the victim of a changing economy and a shortsighted borough council who would rather let an employer vacate to Wales rather than update a building to save hundreds of jobs. Now the formerly busy productive factory just sits and rots, or so it appears to the sleepy little town.

Pulling the van up to the security gate he reached up to the remote hung on the visor and drove inside the cavernous building. In spite of being just across the footbridge from both the Train station and the struggling mall filled with charity shops as much as anything else, there was enough traffic with commuters and shoppers to make his comings and goings to this seemly abandoned factory practically invisible. Not to mention the ease of access for his employers.

Closing the large roll up doors behind him with another push of the remote he waited patiently for the steel doors to close completely before stepping out and turning on the overhead lights and rolling two trolleys beside the van. He carefully lifted each woman from inside and placed them on the the flat smooth surfaces, he paused for a moment to check that their pulse and breathing had not changed. Satisfied that he had sufficient time for the rest of his preparations before they regained consciousness he rolled them down the hall to a very special room.

Pressing yet another switch the lights in the training room came on followed by the soft strains of classical music. He didn’t particularly care for classical music, or really any music at all, but he had found that it made the transition much easier for his new trainees.

The room was cylindrical and at least 50 meters tall, divided by a clear glass hallway with hatches and doorways scattered along its length, it was obvious that these had formerly been the factory silos. He rolled each of the women into their own half of the room and placed them gently on a well padded adjustable bench. Strapping their arms and legs to the benches he began to grin widely, “This is why I do this” he thought as he pulled the hunting knife from his kit bag and began slicing Abigail’s clothes off depositing each freshly removed item in an incinerator bag. He slid the razor sharp blade under the thin strap of fabric between the cups of her bra. “Snip” was the only sound it made as the strands of fabric parted to reveal her breast, the nipples starting to harden upon exposure to the air of the room. Lastly he cut away her cotton knickers to find a cute little landing strip of dark pubic curls. “Oh my, that will have to go, but not just yet” He murmured.

He tucked the last of her ruined clothing into the sack and crossed to the doorway in the glass corridor,  stepping  through he latched the door behind. Now it was Sarah’s turn to be disrobed and he followed the same pattern as he had with Abigail because if Mr Mann was anything, he was consistent.  Once both of his charges were naked and strapped into place he returned once more to the glass hallway and unfolding a stool he sat to wait for the women to wake.

One thought on “Reception”