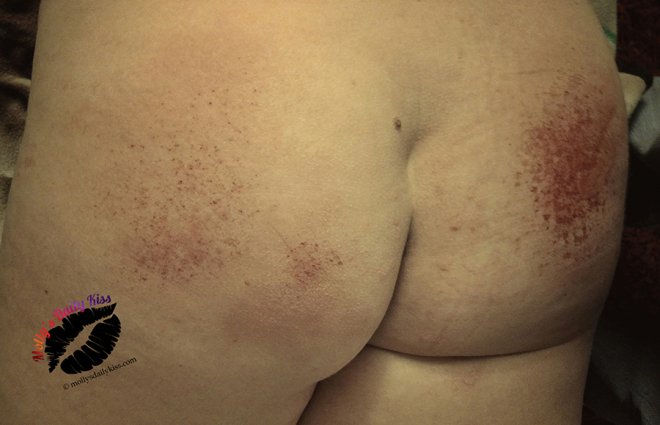 It has been much delayed but we finally managed it. We had a kids free weekend where no one was ill and we didn’t have big work projects hanging over our head. Not that the weekend was work free and Molly kept saying things like “I have so much to do”

But I put my foot down. It has been entirely too long since we have played. So yesterday Molly spent nearly two hours getting her backside reacquainted with the armored canesnake and oh my did that mean some very lovely bruises. Since this is a rare occasion that I am the one to take the picture I will take this moment to ask, does anyone else find it hard to take pictures of bruises that reflect what they really look like? What the camera sees and what I see are two very different thing. Her bottom is wonderfully marked but the pictures seem to show that I am deluded, until I look at her bottom again.

Leaving the photographic evidence behind (so to speak) today was a late starting day since we slept in late (maybe because of the late night, post beating kinky sex). So we each did our working things throughout the day. I kept giving her reminders that our play weekend wasn’t over yet. Oddly she kept finding reasons to put more play off.

When I asked why, she told me her bottom was sore and she was worried that she couldn’t take anymore. She was nervous. I asked her if I had ever given her more than she could handle. The answer to that is no. So back on the living room sofa she went (with thermal socks firmly on her feet) and out came the cat of seven tails and then after she was nice and pink again, the vampire gloves.

This didn’t happen without a struggle. As I have said before she yearns for the marks but rarely does she glide along the path to get them. I like that. I like to remind her to breathe and talk to her all the while telling her that she can do this, that she has done it before and that when we are through she will have her reward.

And that is just the way it went. Unlike when we play in public since we were at home we got to finish our lovely second day of kink with another round of very perverted sex, there were fingers and the Doxy and finally some wonderful doggy style sex. The sofa may never recover.

This has been a very rainy and cold, but satisfying weekend. For the both of us.

4 thoughts on “The end to a long dry spell, on a rainy weekend”

Ooh, baby I’ma love you differently I’ll give you Electricity Give it to you ~ Dua Lipa mollysdailykiss.com/2022/06/1…

@EuphemiseThis I was so lucky as my practice at the time had a dedicated woman health nurse and she was so nice and happy to give me hrt. But I know others who have not had that. Definitely go armed with some knowledge though