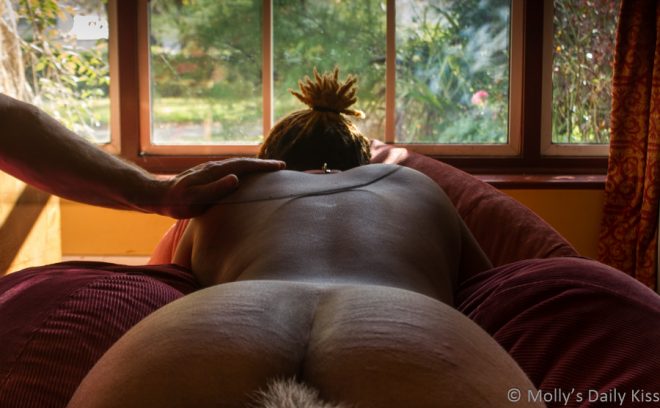 Many of you know that I have a kitten now, but even though we have tweeted about it people have been shy it seems about asking questions. That changed today when I got a DM with the following questions. I asked if it was OK to share those questions with kitten and Molly and got a resounding yes. So what follows are the questions and our answers.

I’m fascinated by your dynamic with Molly and Cara. The how it came about, the how it works, the why you needed it, the… everything! Loads for you to write in D/s life

Michael: How it came about from my perspective is that I had seen some of Cara’s pictures and writings on twitter and told Molly that I thought that she was very sexy. This is a pretty rare thing for me. Not that I don’t think there are lots of sexy people on twitter, I do, but I generally don’t growl and think “I’d love to see that in person” Cara inspired that in me. Even when I do feel like that I don’t pursue anything and I didn’t here either. We simply started talking, talking moved to DM, and DM moved to Skype, and Skype moved to a (entirely too short) visit in person.

How it works is simply that Molly is a better person that I am and has always encouraged me to go where my desires take me, it doesn’t hurt that she has a bit of a kink about watching me with other women.

Why I need it is a tricky question, because before I would have said I don’t need it, that one sub was about as much as I could handle (which reminds me that I need to update my fetlife profile to talk about this change) and that an LDR was absolutely out of the question. The short answer is that I didn’t know I needed it until I met Cara and that what has grown between us is pretty damn amazing and makes me feel good. That being said I know that part of my job in looking after Cara is to help her grow and find someone maybe a bit closer than I am and eventually help her to move on from me onto her next step in her journey and that held me back for a long time in expressing how I felt about kitten. If I kept myself a bit distant it would make that part a bit less painful. But she is such a wonderful kitten that in the end I just had to dive in and just accept that the future will bring what it brings and to enjoy what we have right now. Carpe kitten as it were.

I’m interested in how it came to be. Did she make the move or did you. I know it was organic but at some point someone has to make it clear it’s more than just a chat. And I know how much you adore Molly, so what was it that made you seek something else from elsewhere? I ask with no judgment, just curiosity because it’s so unlike my relationship

Molly: I don’t think he did seek it out I think it just developed between them in a very organic way where they discovered each other and built a strong connection.

Kitten: On the question of how it came about it was very much a gentle thing. I’d had a bit of a twitter crush on him for a while, but was intimidated by him. I remember when he was offering to let someone know they had a secret twitter crush earlier in the year and how I wanted to tell him he was my twitter crush. After that it was a few tweets exchanged where I felt shy, but he was so polite and not the intimidating dom I had in mind. He messaged me first! He wasn’t the typical guy who messaged me though. So polite, honest, and gentle. I just found it incredibly easy to talk to him. I think what drew me was the fact that it was never about sex to start. He’d have me ask him questions and the thing I loved about talking to him is that he made me feel safe. It was never about him being an Uber Dom or controlling me, but this feeling of us both discovering things about each other. He got past my barriers without even trying. It was scary and awesome and everything I needed. It progressed from DomSigns to Sir to Daddy in a very easy way. He meets that need to be cared for in a why I never thought possible. He treats me differently than both friends and family treat me in the way he listens, but also really considers what’s best for me. Sex is a factor and we discuss and talk about and have it. He’s my daddy but I’m very much attracted to him beyond the emotional part.

And how did you approach Molly about it? What was that discussion?

Michael: As I said above, this is not something I sought but rather something that I discovered and our talking never had a goal it was simply about us learning about each other and it just grew from there. Molly was aware every step of the way that we were talking and encouraged us to do that.

Molly: I had known for a very long time that Michael fancied Cara, a long time ago he even showed me a picture on Cara’s blog of her bottom and expressed a desire to spank her but they had never exchanged more than the odd tweet now and then. For whatever reason there was some playful tweeting and I think I suggested to Michael that he DM her. The rest in many ways is history. This is their relationship, I am a part of it but I made an active decision to very much take a back seat and give them space to explore things and see where it led them. Since Cara’s visit I think we are much more connected as a three and when they Skype I tend to be there but the rest of their conversations are between the two of them.

Kitten: In relation to Molly, I always felt like Molly was aware. Not in a creepy, hanging over relationship type of way, but more of a smiling figure encouraging us to explore. Present and supportive. When we started calling, Molly was there to add to the conversation. I never once felt like she disapproved or disliked what was going on. I liked knowing she was there too. Almost like she was coming along even if she wasn’t directly in the relationship. And honestly, seeing how much they interacted, and loved one another made me fall for him a little more.

And what if Molly wanted a boyfriend? How would that sit with you? Because I think I’ve read that she’s ok with mono-ish but you aren’t so happy to share her…

Michael: This is where I feel the most torn about the whole thing. I know she wants a boyfriend and you would think that because I have a girlfriend that the old expression “What is good for the goose is good for the gander” would apply, but you would be wrong because I suck as a person in that regard. Molly doesn’t seem to have a jealous bone in her body while I seem to be made of pure, unfiltered jealousy.  And it often weighs heavily on me. I am trying my best to let it go, but mostly failing miserably.

Molly: So some things. I don’t see this as a quid pro quo situation. They are utterly unrelated for me in my mind. At no point do I see this as an exchange. It is not like I am OK with this just so I can then get something I want. To me that would seem hugely manipulative and disingenuous.

I don’t have issues with jealousy and I am genuinely happy and excited for Michael to have found Cara.

As for me having a boyfriend I would be lying if I said I hated the idea but I know Michael does hate the idea. It is complicated and difficult but it is something for us to work on (or not) and I see it as something completely separate to this.

Thank you very much for the questions and I am sure that you will find that there is much more to be said by all of us on this topic and if you have any questions at all you can leave them in the comments, or ask them on twitter